Integrated services for VIA 57 WEST

VIA 57 WEST is an iconic and award winning addition to the New York skyline. Located at 625 West 57th Street in Manhattan’s Hell’s Kitchen neighborhood, CTBUH has named it best tall building in the Americas category as part of the 2016 Tall Buildings Awards. With a dramatic sloping façade, the building resembles a large, perforated pyramid. Danish architect Bjarke Ingels, working on commission from the Durst Organization, designed VIA 57 WEST with a central plaza of green space and open balconies that present special wind engineering challenges.

The Durst Organization turned to CPP for our expertise on several issues that could affect the development:

To tackle these issues, CPP’s engineers designed and built a 1:300 scale model of the proposed building and all significant structures within 1,400 feet. We then subjected it to a range of tests in our wind tunnel and discovered valuable information about the building’s wind performance.

We tested VIA 57 WEST for static and dynamic wind loads and responses to determine the range of wind directions that are most likely to cause discomfort for the building’s occupants. By evaluating how much motion occupants would experience on each floor on windy days, we were able to offer recommendations to the project’s structural engineering team to reduce that motion to acceptable levels.

By instrumenting the scale model with more than 700 pressure taps, our engineers measured worst-case wind loads across the surface of each elevation of the building, including the courtyard and occupant balconies. Although the structures façade generally performed well, we found several areas with design wind pressures that justified closer examination and reinforcement– valuable information for the design team.

Given New York’s windy reputation and the project’s riverside location, designers were concerned that VIA 57 WEST and its surroundings might experience gusts that would make outdoor users uncomfortable. Our study confirmed that certain ground-level areas might be unsuitable for long-duration activities, such as lounging, but that mitigation measures, like planting trees as natural wind blocks, could improve wind conditions considerably. We found the interior courtyard would perform admirably in the wind without any further redesign. 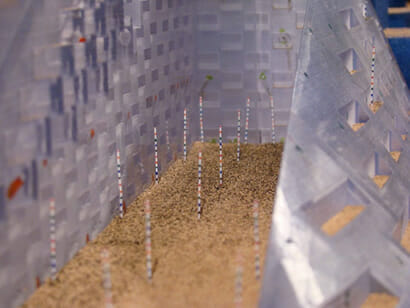 We modeled ground-level snow accumulation at building entrances, pedestrian areas, terraces, and courtyards. We assessed the likelihood that snow accumulation would interfere with day-to-day pedestrian use of sidewalks and exterior areas, determined worst-case snow depths, and estimated the resulting snow loads would most likely form standing sheets of ice.  To do all this, we conducted scale model testing in a wind tunnel, using a snow substitute, in which we collected actual results from snowfall and drifting to identify major problem areas.

Based on our wind tunnel snow simulation, we identified specific areas where the design team could improve safety by increasing the values and areas where they could safely decrease those values to increase efficiency without compromising safety. 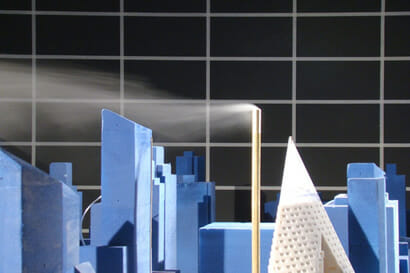 Finally, we conducted a comprehensive air quality assessment in the wind tunnel to evaluate how VIA 57 WEST would change pollution dispersion from Con Edison, the nearby power plant. This assessment was to verify Con Edison remained within regulatory standards, which would help avoid problems with its permitting process. Because each new building has an effect on the local airflow patterns, we also examined how the construction of VIA 57 WEST would affect the air quality on three planned buildings in the immediate area.

Fortunately, we found that VIA 57 WEST would neither significantly affect, nor be affected by, the emissions from the Con Edison plant. The air quality of nearby proposed buildings would also be unaffected. Such specialized and site-specific information is a key benefit of wind tunnel modeling in urban environments.

CPP’s multilayered approach to VIA 57 WEST demonstrates how one project can benefit from integrating several services into one comprehensive study. Performing integrated consulting services from CPP ensures that your next project is safe, efficient, and comfortable.