Standing at fifty-eight stories and 274 meters (over 900 feet), Ilham Tower commands attention, with its distinctive diagonal lines and crisp accents of glass, steel, and greenery. Located in Kuala Lumpur’s “Golden Triangle,” the skyscraper was completed in 2015 and is today the fifth tallest building in the Malaysian capital. 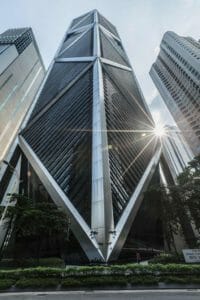 CPP engineering expertise contributed to the building’s noteworthy success, and CPP’s Max Lee happens to work out of an office located within Ilham Tower.

CPP’s involvement in the project began in 2009 when the company was contacted by Ilham Towers project manager, Plenitude Builders Sdn Bhd. Other noteworthy team members include Foster + Partners, the design architect, and TY Lin International Sdn Bhd, the C&S engineer and winner of Gold Award of Special Merit 2017 for their work on Ilham Tower.

When the project was still in the design phase, CPP contributed immediately with a qualitative, preliminary view of environmental wind considerations. The report covered downwash impact on ground areas, structural loads based on the Malaysian wind code (MS-1553), and wind impact on breakout spaces such as external balconies and drop-off areas. These findings directly influenced ongoing architectural work. 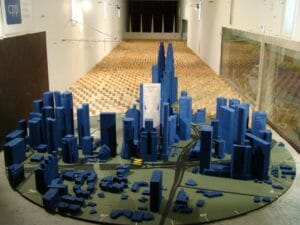 Ilham Tower has been recognized as a green building, for which CPP shares credit. Resulting from the wind-tunnel testing phase, CPP recommended the configuration of access doors to minimize energy consumption. “A proper air seal between the lobby and upper floors,” explained Glanville, “can prevent updrafts and downdrafts, such as through elevator shafts”. “Disregard for reliable air seals can negatively impact a building’s cooling load.” The building received a BCA Green Mark Gold Plus rating.

“Ilham Tower lives up to its promise as a beautiful and pleasant place to work,” said Lee. “I’m proud of CPP’s role in that.”