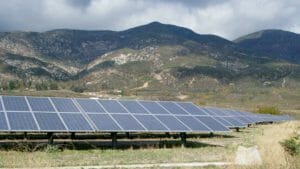 Wind tunnel studies are the most accurate, efficient way to determine the wind loads on a solar racking system, to ensure the reliability—and minimize maintenance and repair costs—of that system. In a typical wind tunnel study, however, the results are frequently presented as the worst of all wind directions. In the U.S., a structural engineer will most likely follow procedures from ASCE 7, which tells them what design wind speed to use, and allows for a 15% reduction in loads as a wind directionality factor (which is just an attempt to account for the cases when the strongest winds do not come from the most sensitive wind direction for the system being designed).

Since solar arrays are particularly sensitive to certain wind directions, we know that in some wind climates the standard ASCE 7 procedure will underestimate the wind loads. That’s because the worst wind actually comes from the direction to which the system is most sensitive (which is bad news, but at least you are aware of the increased risk). And in other climates, the worst wind speed comes from a direction to which the system isn’t sensitive at all (good news!).

Our site studies can determine the actual wind speed and directionality for a given site and, thus, identify the real risk. We analyze local wind data from one or more nearby airport anemometers or, for hurricane prone regions, through a complex hurricane simulation. Through these site studies, we can predict the wind speed that will occur for each direction/sector. ASCE 7 allows this procedure when wind tunnel testing has been performed to determine the system’s directional sensitivity.

The site study can also include an exposure analysis around the proposed installation. Exposure is the description of the natural and built environment near the site. If it’s open country, the site is more exposed than if it’s surrounded by suburbs and/or trees.1 ASCE 7 has fairly strict rules about exposure, requiring you to use the more exposed category if even one direction qualifies. CPP can take a closer look at this, and determine the exposure by direction/sector as well, allowing an accurate assessment of exposure.

At the end of the day, we can determine the real risk involved at a given site, and potentially remove costly conservatism from “standard” wind load estimates.

1 Technical Note: Ground mount sites are frequently in open country, so they don’t benefit as much as roof mount solar systems from this exposure analysis. There are lots of cases where roof mount solar on a building in a mostly built-up environment would have to use open-country exposure because one direction is open.