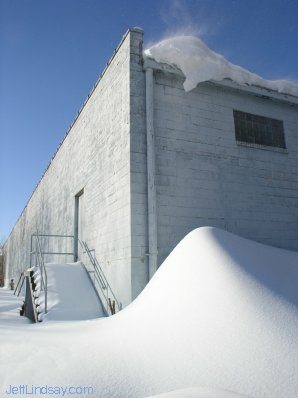 Developers who build structures in snow-prone regions must consider winter weather in their designs. If the wind is calm, snow weighs down whatever it falls upon with a gravity load that increases as the snow accumulates. Wind complicates such forces by scouring snow away from some areas and depositing it in others. One need only shovel one’s walk following a wet spring snowstorm to understand just how great snow loads can be.

Engineers account for snow loads either by following code-based procedures or by conducting an appropriate experimental study.

Code-based approaches to snow loading generally make use of the snow load provisions in Chapter 7 of Minimum Design Loads for Buildings and Other Structures (ASCE/SEI 7-10), published by the American Society of Civil Engineers (ASCE) Structural Engineering Institute (SEI).

Methods based upon ASCE 7-10 involve the following generalized process.

Multiplying the four above quantities together and then multiplying again by 0.7 yields the flat roof snow load. This snow load is then further adjusted according to roof slope, proximity of nearby structures, and other factors.

The code-based approach is inherently generic and, while it’s likely to be conservative in many cases, it can’t accurately capture every situation.

The goal of an experimental study is to measure how snow accumulates on a scale model by introducing snow-like substances into the tunnel at low speeds. Various materials are used to simulate snow, including crushed walnut shells, sawdust, sand, and wheat bran. Materials are chosen according to how well they accurately replicate the behavior of snow at model scale.

The test article is rotated to simulate winds approaching from all directions, and wind tunnel technicians directly measure the accumulation of the faux snow. The depth and nature of the simulated snow indicates the expected real life snow load pattern.

The results of the wind tunnel experiment may be used directly (The particle method), or they may feed into a computational simulation called a time step method. Such simulations seek to predict time-varying snow loads by coupling experimentally determined snow depths to meteorological records. For more information on time step methods, see the article “Roof Design Snow Loads by Wind Tunnel Test And Analysis” by CPP’s Jon Peterka and Bill Esterday, published in the 2004 proceedings of the ASCE Structures Congress in Nashville, Tennessee.