There’s no doubt the 2017 hurricane season was one to remember. Last year, Hurricane Maria was the strongest storm, and no one can forget the destruction of Hurricane Harvey. After an eventful year, everyone’s waiting to see what the 2018 hurricane season will bring.

The Atlantic hurricane season started on June 1 and runs through November 30. However, this season began early with Subtropical Storm Alberto bringing a rare out-of-season storm, hitting May 25 and continuing until May 31. So far this year, we’ve experienced three tropical depressions, three tropical storms, and two hurricanes. The strongest storm so far this year has been Hurricane Chris, which started on July 2, and has wind speeds up to 105 miles per hour. We’re only a month into hurricane season, so we’re sure to see more strong storms before the season is done, especially as we reach the peak of hurricane season between mid-August and late October.

Whether we’re referring to hurricanes or typhoons, they’re all tropical cyclones. And they all develop in the same way. 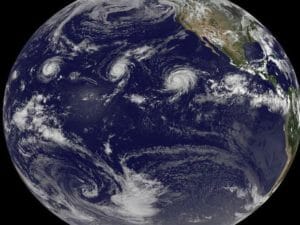 f the Earth didn’t rotate, neither would tropical cyclones. The Coriolis effect, which governs the motion of objects in a rotating frame of reference, like the Earth spinning about its axis, ensures that storms in the Northern Hemisphere rotate counterclockwise, and those in the Southern Hemisphere spin clockwise.

Hurricanes and typhoons aren’t the only type of cyclonic storms. Even as we reach the peak of hurricane season, we’re reaching the end of tornado season. But while most tornadoes develop between March and June, these violent vortices can really appear during any month of the year.

What does this mean for building design professionals? As we discussed in, “Is there such a thing as tornado-proof?” and “The alternative to tornado-proofing,” a wind-engineered structure will be much more likely to survive otherwise-destructive wind events. Since there are only a few qualified wind engineering firms in the world, be sure you consult one that has extensive history and experience in the field. And the right letters in the name. Cs and Ps are good.