Dr. Ron Petersen to speak and present paper at 20th Joint Conference on the Applications of Air Pollution Meteorology with the A&WMA

The 20th Joint Conference on the Applications of Air Pollution Meteorology with the A&WMA will be held January 7-11, 2018, as part of the 98th AMS Annual Meeting in Austin, Texas. Learn more about the conference here. 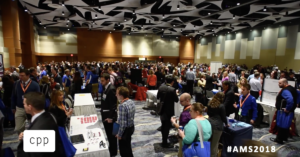 CPP’s Dr. Ron Petersen will speak and present the paper Development and Evaluation of Improved Building Downwash Algorithms for Rectangular and Streamlined Structures. The paper is authored by Petersen and CPP’s Dr. Sergio Guerra.

In December of 2006, AERMOD officially became the EPA-preferred model for regulatory dispersion modeling applications. The Plume Rise Model Enhancements (PRIME) algorithm calculates fields of turbulence intensity and wind speed, as well as the local slope of the mean streamlines as a function of the building dimensions, which, coupled with a numerical plume rise model, determines the change in plume centerline location with downwind distance.

Petersen and Guerra documented several theoretical flaws in PRIME that likely account for the overpredictions. Based on this initial work, three industry groups funded a research study in late 2016 to address known issues, with the goal of developing a fully operational version of AERMOD with improved building downwash algorithms that will ultimately be implemented for regulatory use by the EPA.

Learn more about the presentation and paper here.