Get to know a flow feature: Turbulence

Ladies and gentlemen, the captain has turned on the fasten seatbelts sign. Please return to your seats and fasten your seatbelts.

It’s one thing to hear this half an hour before your scheduled landing. It’s quite another to hear it smack in the middle of the flight. The former means the aircraft is about to begin its descent into the destination airport. The latter means you’re probably going to hit some turbulence, which, as Dave Barry so eloquently explains, feels as if “the plane has rammed into an airborne object at least the size of a water buffalo.”

Turbulence. To most of us, it means a violently shaking airliner, crying babies, and perhaps a soupçon of motion sickness. But to wind engineers, it means that and so much more. Turbulence is the name for fluid flow that exhibits chaotic, irregular fluctuations in speed and direction. But what’s behind this strange yet familiar phenomenon?

All fluids, from air and water to honey and lava have an intrinsic property called viscosity. Viscosity roughly corresponds to how well a fluid resists forces. Fluids with low viscosity, like air and water, turn this way and that in response to a force. They give in easily to demands. A river, for example, readily tumbles over cliffs under the force of gravity to create spectacular waterfalls. Upon impact, it splashes, sprays, and foams charismatically before settling down and gurgling happily along downstream.

Honey, however, is more reluctant. Think of the last time you used one of those little plastic bears to deposit some sweetness onto a piece of toast or into your cup of tea. Even if you enthusiastically squeeze the bottle, honey falls somewhat leisurely. And unlike the waterfall, there’s no splashing, no mist of sweetness. It just drips cleanly toward your plate and settles right on down. It’s sluggish and thick, like Jabba the Hutt.

Imagine that two small blobs of fluid, let’s say air, are two vehicles driving down the motorway. One is a compact car, the other a full-sized SUV. Both have identical braking systems. At the same speed, the SUV has more momentum than the compact car simply because it has more mass. And both cars can increase their momentum by driving faster.

In this example, the ability to brake is like viscosity, and fluid flow is like the car moving down the road. Viscosity helps smooth out disruptions in the environment so that the fluid remains in control of its flow. The faster the fluid moves, or the more mass it has (that is to say, the denser it is), the harder it is for viscosity to slow it down and maintain stability.

When the fluid reaches a certain critical level of momentum, viscosity is no longer sufficient to keep things in control, and the fluid becomes unstable, akin to a car that careens off the road when it hits black ice. That’s why, for example, water pouring from your kitchen faucet comes out in a nice smooth stream when you only partially open the tap, but becomes rough and chaotic (turbulent) when you open it all the way. 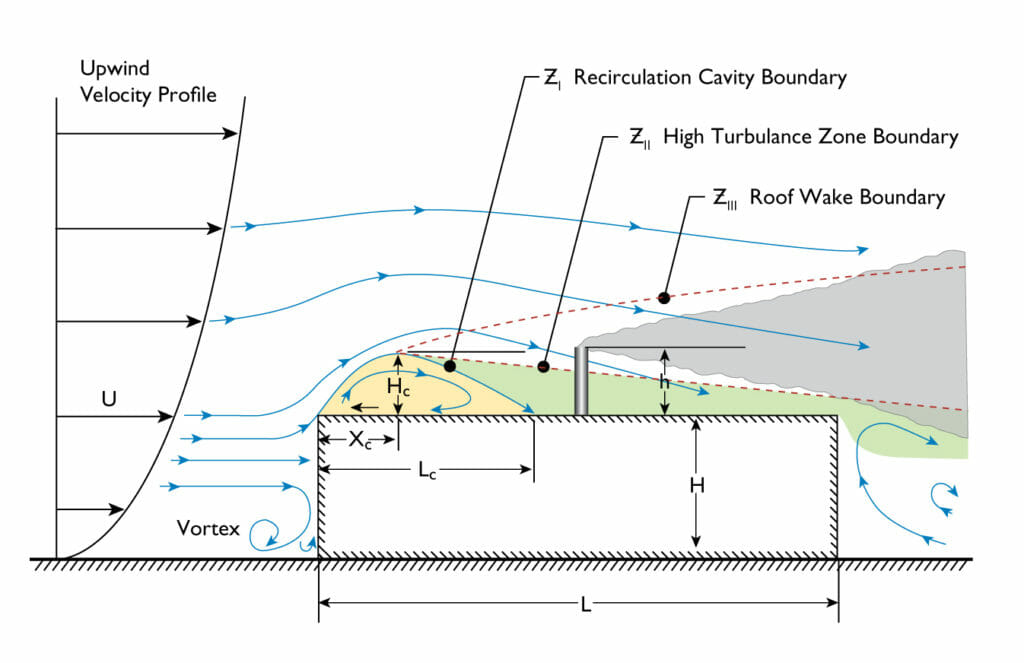 Turbulence is incredibly complex. Richard Feynman, who received the 1965 Nobel Prize for Physics, called it “the most important unsolved problem of classical physics.” Sir Horace Lamb, an English mathematician and a Fellow of the Royal Society, famously said, “When I die and go to heaven, there are two matters on which I hope for enlightenment. One is quantum electrodynamics, and the other is the turbulent motion of fluids. And about the former I am rather optimistic.”

Our atmosphere is inherently turbulent. The flow patterns that affect buildings and structures always exhibit wild fluctuations in wind direction and velocity. And unlike airplanes, buildings and structures tend to be blocky and cornered rather than smooth and aerodynamic. So even if we never fully understand turbulence, having the right tools to account for it makes all the difference in designing for the built environment.

Contact CPP before your next project gets underway and let our wind engineering experts put their experience to work for you. With an appreciation for the subtleties of turbulence, we’re uniquely equipped to help you achieve a design that is safe, efficient, and comfortable.