Get to know a flow feature, Godzilla edition: The pressure to move

Company culture is that undefinable sense of place and of shared values that develops through the countless interactions that occur between employees, management, work, and environment. It’s almost impossible to accurately describe a company’s culture with words, and as our friend Werner Heisenberg taught us, the very act of measurement changes that which we wished to define in the first place.

It’s impossible to fully capture CPP’s culture in one sentence, but if we were forced to do so (Let’s say HR made us do it as a team building activity), then ours might best be illustrated through an allegory:

CPP is a company of innovators who embody a legacy of pioneers, all founded on a tradition of technical excellence—from test plan to tunnel model. And occasionally our miniature cityscapes are attacked by Godzilla.

Godzilla, as you no doubt already know, is an improbably large radioactive lizard who has unleashed mayhem and destruction on the people of Tokyo with uncanny regularity since 1954. Less known, however, is that Godzilla and his quarry also happen to be perfect metaphors for the concept of dynamic pressure.

Imagine peering down on Tokyo on a calm day, after the morning commute, let’s say. The first thing you might notice, aside from the absence of a terrestrially gifted leviathan, is a haphazard swarm of people. Millions of Tokyoites, going about their usual business, would produce a definite sense of motion (a buzz, if you will), but it wouldn’t have any particular direction. Some would be walking east, others walking west, others north, and still others—wait for it—south. The net effect would be just a cloud of humanity ambling about, but the distribution of people would remain more or less the same, with no favored direction. They’d even bump into one another, as often happens in any large city, even those free of monsters.

You see, plain old vanilla pressure, as we understand it in the everyday colloquial sense of the term, refers specifically to static pressure, or atmospheric pressure, and it’s kind of like a busy city scene. Each molecule of air (which, itself, is a blend of nitrogen, oxygen, and other gases) larks about with no particular direction favored over another. Viewed from afar, the situation is just, well, static. What we measure as atmospheric pressure is the net effect of countless individual molecules randomly striking our sensors (actually, we can count those molecules, but let’s leave that for another day). 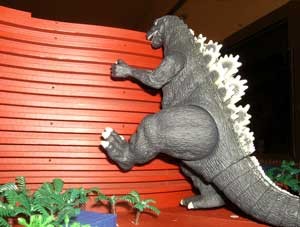 Now let’s unleash Godzilla. Suddenly, the crowd starts to collectively move away from the disturbance. Very few individuals actually move in the exact direction as the overall group at any given instant (it IS pandemonium after all), but we observe a definite bulk directionality where before there was only randomness. Sometimes everyone gets bunched up into a dense clump, but the crowd continues to move forward so as not to be toasted by deadly fire breath.

What’s important to remember is that, despite the jargon we wind engineers might sometimes use, there is no such thing as negative pressure. When we talk about negative pressure, what we really mean is that the pressure in one area is less than some reference quantity.

Consider a typical situation in which straight-line winds blow against a rectangular skyscraper. The windward side of the building experiences what we casually call “positive pressure,” which just means a pressure that is somewhat higher than some reference value. The leeward, or wake, side of the building, experiences what we might call “negative pressure,” which similarly means a pressure that’s less than the same reference. But both pressures are, in absolute terms, still positive, in that they represent the cumulative effect of air molecules that have random (static) and directional (dynamic) motion. And ultimately, it’s the difference in two pressures that matters when it comes to your building.

So where does the actual monster fit into all of this? Godzilla represents the driving force 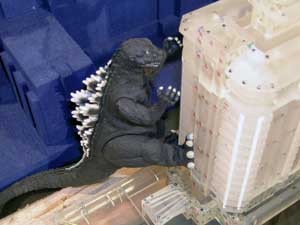 that prompts molecules to move in a given direction. In your building it might be the HVAC blower. Outside, it’s a high pressure system pushing air toward a region of low pressure. When you stick your hand out the window of a moving vehicle, it’s the relative motion of your hand against (more or less) stationary air.

So there you have it. Despite the analogy, dynamic pressure is no monster, especially when you have the right tools to defeat the beast. At CPP, we specialize in solving monstrous problems so you can focus on all the other things that matter.

Just don’t call us about ghosts. We don’t do ghosts.