Get to know a flow feature: Separation anxiety 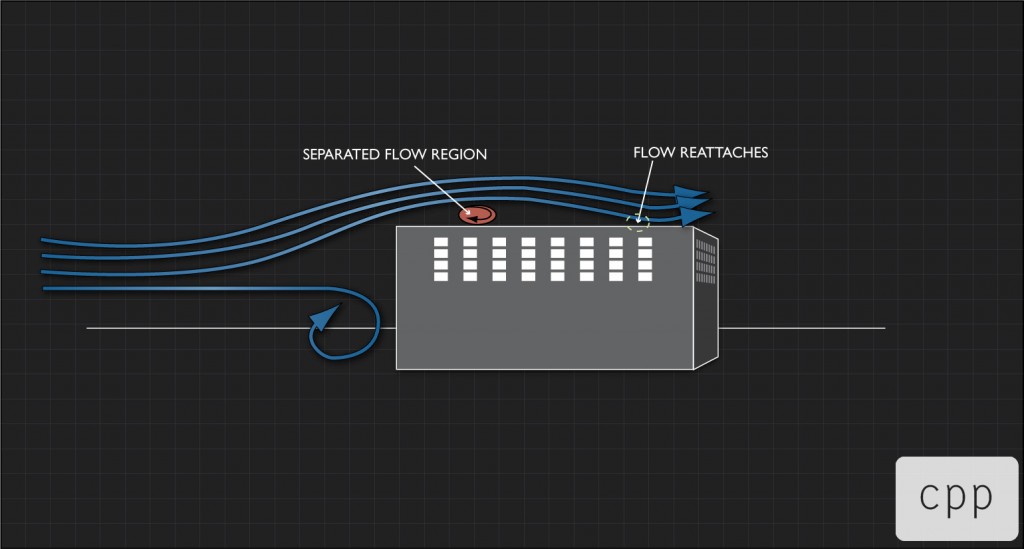 In this the first installment of our more-than-one part series on flow phenomena, we take a look at flow separations. A separation is exactly what the name implies: Airflow separates away from a solid surface instead of remaining attached and flowing nicely alongside it. It’s an important phenomenon to recognize because separated flow is less predictable than attached flow, which means that designing for it may require using special tools and methods.

When airflow separates from the general direction of travel, it develops into swirling, chaotic eddies and vortices. The rotational nature of these features means that in some locations, airflow may even travel opposite the direction of the main flow. Eventually, given the right geometry and conditions, the flow may reattach to the surface somewhere downstream. The space between the separation point and reattachment location is called a separation bubble.

Flow separation phenomena are closely related to wakes, and it can help to think of a separation as a wake that develops prematurely—beside an object rather than behind it. To gain firsthand knowledge of what these chaotic flow regimes feel like, one need only drive behind a semi truck on an interstate highway for a few minutes. An even more dramatic understanding may be gained by driving behind that semi in southern Wyoming.

In aeronautical engineering, a flow separation is usually defined as A Very Bad Thing, because it can reduce lift, increase drag, and, in some cases, create violent vibrations. Indeed, much of the design that goes into an aircraft’s shape specifically attempts to delay or prevent (or at least reliably predict) flow separation. It’s also the reason that golf balls have dimples, to create local turbulence near the surface, which can help prevent separation and allow the ball to fly more predictably.

Here are just a few ways that flow separations can affect buildings and structures:

Flow separation phenomena are complex but predictable, much like those of us who study them. But when the feature is well understood, it needn’t create anxiety (and we’re pretty non-anxiety-inducing, ourselves).