Development and Implementation of New Building Downwash Options in AERMOD 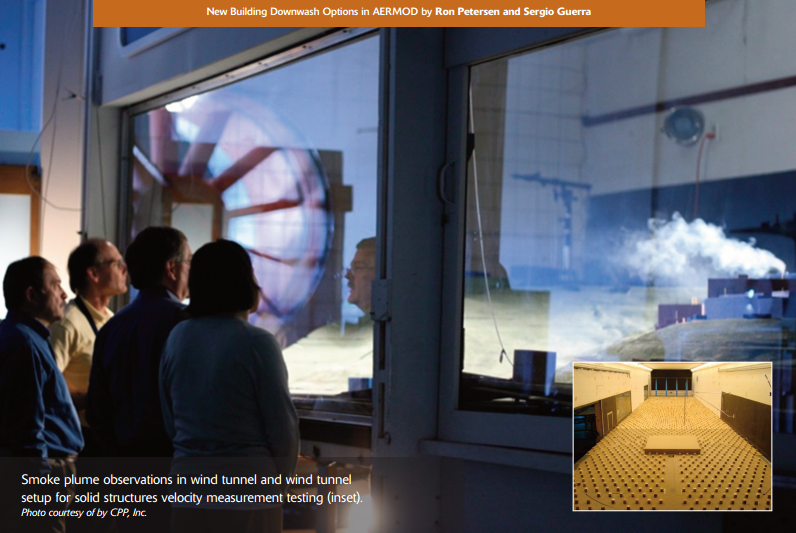 A discussion of AERMOD’s capabilities to model the complex air flows around buildings.

This article appears in the April 2021 issue of EM Magazine, a copyrighted publication of the Air & Waste Management Association (A&WMA; www.awma.org).

The National Environmental Policy Act of 1 969 committed the United States to sustainability, declaring it a national policy “to create and maintain conditions under which humans and nature can exist in productive harmony, that permit fulfilling the social, economic and other requirements of present and future generations.” 1 The U.S. Environmental Protection Agency (EPA) expanded the definition to include the environmental impact of man. To help ensure a sustainable present and future, the air quality impact of industrial emissions needs to be evaluated. AERMOD is currently the main EPA-approved dispersion model for use in evaluating the air quality impact of industrial emissions.

Figure 1 illustrates the interaction between social, environmental, and economic factors that are part of the complex process of “sustain-ability”. Under this context, having an accurate regulatory model (i.e., AERMOD) is of utmost importance. Society needs electricity, fuel, food, transportation, and many other items that directly or indirectly create air pollutant emissions. Industry must build their facilities in a manner that ensures that public health is protected by abiding to National Ambient Air Quality Standards. If dispersion modeling overestimates ambient impacts, emission controls cost will be higher than necessary and the extra cost will be unnecessarily borne by society. If the model underestimates, the actual air quality impacts will be greater, which in turn may cause adverse effects to the environment and public health. An accurate model creates a perfect balance as indicated in Figure 1 . To that end, this article discusses how improvements to AERMOD’s capability to model the complex flows around buildings is important to obtain more accurate concentration estimates. 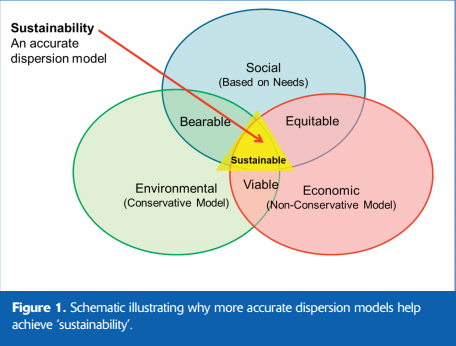 At the 2015 11th Air Quality Modeling Conference,2 and in a subsequent journal paper,3 Petersen and Guerra documented several theoretical flaws in PRIME4 (the building downwash formulation in AERMOD5). These initial papers pointed out many reasons why the PRIME formulation needed to be updated, including outdated downwash theory based on research done over two decades ago; theory based on a limited number of “solid” building shapes;6 theory not suitable for porous, streamlined, wide or elongated structures; theory based on theoretical assumptions that can be improved upon; and under and over predictions when compared to observations from recent and past field databases. Based on this initial work, an industry funded research study was initiated in late 201 6 with the following overall objectives:

(1 ) correct the known problems in the theory;(2) incorporate and advance the current state of science;(3) expand the types of structures that can be accurately handled (e.g., streamlined, porous, long, wide); (4) properly document and verify the model formulation and code for the updated PRIME (referred to as PRIME2); and (5) develop methods with EPA to facilitate implementing model improvements in a more expeditious manner. The industry groups that funded the initial research included the American Petroleum Institute, the Electric Power Research Institute, the Corn Refiners Association, and the American Forest & Paper Association. The recent phases of research and model implementation were funded solely by the American Petroleum Institute.

To help advance this research to improve PRIME, the PRIME2 subcommittee under A&WMA’s Atmospheric Modeling and Meteorology (APM) committee was formed to:

(1 ) establish a mechanism to review, approve and implement new science into the model for this and future improvements; and (2) provide a technical review forum to improve the PRIME building downwash algorithms.

Collaboration with EPA’s Office of Research and Development (ORD) and Office of Air Quality Planning and Standards (OAQPS) has been ongoing during the research project. The expectation from the modeling community is that the new model could be implemented in a more expeditious manner and that protocols be developed and implemented for future model improvements. The initial research involved the use of wind tunnel modeling to develop a database of wind speed and turbulence intensity measurements downwind of various solid, porous, and streamlined
structures. 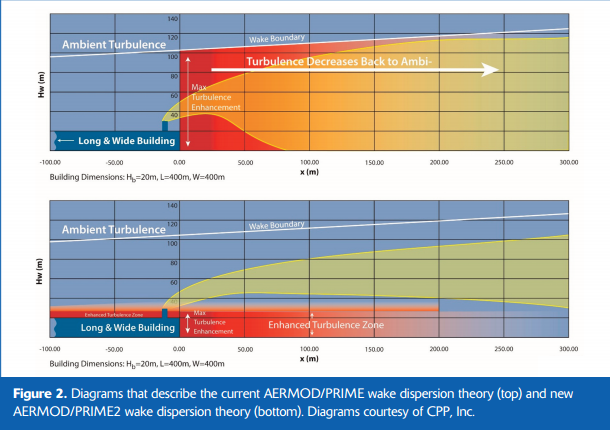 Based on those measurements, new equations were developed to better describe dispersion when building wake effects are important. The new PRIME2 building wake equations showed significantly better agreement with wind tunnel observations than the current PRIME equations in AERMOD. The new equations were documented in a journal article 6 and were added to AERMOD’s formulation. A new version of AERMOD was then compiled with the new enhanced theory (PRIME2) for evaluation. The basic difference between PRIME2 and the current theory in AERMOD is illustrated in Figure 2.

A&WMA’s PRIME2 subcommittee and partners worked with EPA during a February 2018 meeting to lay out a path to take PRIME2 from a research to a regulatory default option (shown in Figure 3). PRIME2 is currently an Alpha option in the 201 9 AERMOD release, which means that it is available for testing but not regulatory use. Following the plan in Figure 3, the PRIME2 code with switches to turn on/off downwash options was submitted to EPA in October of 201 8. It took about 1 3 months from the start of the research project to getting the PRIME2 code to EPA. In late summer 201 9, EPA released AERMOD version 1 91 91 , which includes Alpha building downwash options that are enabled using keywords. The first keyword enables the PRIME2 theory discussed herein 7 and the second one enables the theory developed by EPA ORD. Details on the ORD enhancements can be found in Monbureau et al (2018). 8

Once a keyword is specified, various parameters can be set that control what wind speed is used to compute the main plume concentration, the building wake and cavity equations that are used and whether structures are streamlined or rectangular. If no keyword is specified, the current AERMOD building downwash formulation is used (PRIME). Important inputs to PRIME and PRIME2 are the building dimensions. Currently, these dimensions are calculated by BPIPPRM (Building Profile Input Program for PRIME). 9

Figure 4 shows why calculated building dimensions are often incorrect and can make the building much larger than is realistic. BPIPPRM calculates an effective length and width for the structure in Figure 4 indicated by the gray shaded area. Monbureau et al (201 8)8 recommends that the building length be set to the length of the segment from B to C in Figure 4 with the width set to the BPIPPRM width. This provides more realistic inputs for cases like the one shown in Figure 4. EPA has developed an updated BPIPPRM program (BPIPPRM v1 91 91 _DRFT) that incorporates these updates.1 0 At the moment, this version of BPIPPRM cannot be used for regulatory purposes and it is available for testing and research purposes only.

The PRIME2 enhancements were evaluated against three databases as reported on by Petersen et al (2018).1 1 Generally PRIME2 predictions showed good agreement with observed
concentrations. However, there was a tendency for PRIME2 to overpredict concentrations for the Bowline Point and Alaska North Slope field data bases. Subsequently, the plume rise algorithms in PRIME were evaluated and it was determined that the plume rise formulation is underpredicting, which would account for the PRIME2 concentration overprediction tendency.

A new parameter that gave better agreement with plume rise observations was then determined. Figure 5 shows typical results from the evaluation of the current PRIME plume rise algorithm and the one with the updated plume rise parameter. A new Alpha option switch was added to the current AERMOD (v1 91 91 ) so that the new plume rise parameter could be utilized. Predicted concentrations were again evaluated against the downwash field databases. Only the results for the Bowline Point model versus field evaluation are discussed here. Figure 6 shows a photograph of the Bowline Point power station, key dimensions, and other relevant information. 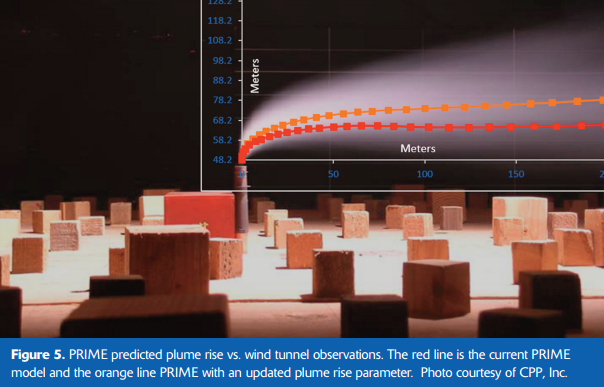 These results show that PRIME2 has improved the predictive capability of AERMOD (PRIME) for building downwash situations like Bowline Point. Evaluations against additional field databases are needed to fully confirm PRIME2’s improved predictive capability. Summary and Future Work This research along with A&WMA’s PRIME2 subcommittee and EPA’s OAQPS/ORD review and input has helped update the technical validity of the building downwash and plume rise formulations in PRIME. These updates are available as Alpha options that are being evaluated with the intent of making them usable for regulatory purposes: next as Beta options after additional research and validation; and subsequently as default options after EPA rulemaking. The PRIME2 subcommittee will continue to work with EPA OAQPS/ORD in evaluating these options and future model enhancements in a collaborative effort to improve the science in AERMOD. 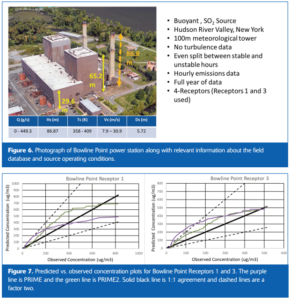 While this article has shown that significant improvements have been made in AERMOD’s building downwash theory and model prediction capability, research has also found other areas that still need attention.

These include the building dimension inputs (BPIPPRM), the way the predictions transition from building downwash to ambient conditions, the main plume dispersion when the plume rise is at or below the top of the building, treatment of stack-tip downwash, and treatment of lattice and platform type structures.

Research and development of model building downwash improvements should be an ongoing process to help ensure a “sustainable” future. This study has shown that improvements can be made in a rather quick manner and be included as Alpha options in EPA model updates. The next phase is to transition these options from Alpha to Beta and then finally to a default status.

Acknowledgment: The authors appreciate the support of the industry groups mentioned in the article that have funded this effort and especially the continuous and ongoing support of the American Petroleum Institute that has taken this research to Alpha options in AERMOD 1 91 91 .

Benefits of Measuring Wind Loads on an A...