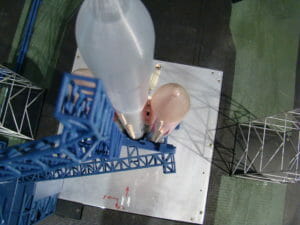 The idea of wind tunnel testing for space launch vehicles might bring to mind a rocket roaring through the atmosphere as it propels its payload into Earth’s orbit or beyond. The wind tunnel testing we are referring to, known as atmospheric boundary layer wind tunnel testing, simulates the effect of the wind on the vehicle while it is waiting on the launch pad–sometimes for days–before the actual launch. Although most of us rarely consider this threat, understanding wind loads on the ground is critical to protecting the rocket itself, as well as the payload and crew members, if the mission is crewed. Once loaded with fuel, a typical 200-foot tall rocket becomes a potential bomb the height of a 20-story building that could explode were it to buckle or be blown over by a gust of wind. Wind tunnel testing helps determine what wind speeds are safe for the rocket to be exposed to, before it is rolled onto the launch pad and while waiting to launch. It is not uncommon to roll a rocket back into a protected building or to shield it with a mobile service tower should windy conditions be predicted. Safety is the primary concern!

United Launch Alliance (ULA), CPP’s longest-term client for space vehicle and launch site testing, is a joint venture of Lockheed Martin and Boeing that was formed in 2006. ULA provides launch services for rockets that carry payloads ranging from imaging, to weather/scientific research, to telecommunications and national security satellites, and spacecraft for interplanetary space exploration, such as the Mars rovers. In addition, ULA will be launching astronauts in Boeing’s Starliner capsule on its Atlas V rocket.

ULA uses wind tunnel testing to ensure the investment in the rocket and its contents are safeguarded against loss due to dangerous ground winds. To date, ULA boasts a pristine launch record, with 100% success rate, thanks in part to CPP’s wind tunnel testing and analyses, which allow them to properly assess the wind-related risks up to the time of launch.

Besides being the largest and most experienced US wind engineering company, CPP is the only firm that is technically—and legally—qualified to provide this kind of testing service to US aerospace companies. Launch vehicles and space technology fall under ITAR and export-controls, as defined by the US State Department, which means only “US persons” (again, defined by the State Department) may have access to the project information. CPP has been involved in wind tunnel testing of launch vehicles, specifically for ULA and its predecessor companies, since the 1980’s long before the official formation of ULA. CPP engineers have performed more than a dozen wind tunnel studies for ULA launch vehicles, such as the Atlas V, Delta II, Delta IV, and Vulcan, and modeled several launch sites at Vandenberg Air Force Base near Santa Barbara and Cape Canaveral in Florida.

Each launch site and vehicle is unique, so in most cases a wind tunnel study is performed for each vehicle and launch site combination. These small-scale studies take into account the particular rocket geometry, the presence of crew access towers or umbilical towers, site topography, and base buildings. All of these items affect the wind loads on the rocket. The appropriate wind characteristics are simulated at model scale using blocks, spires, and trip boards on the wind tunnel floor upwind of the model launch vehicle. These replicate the effects on wind speed and gustiness caused by obstructions like trees and buildings, and even waves on open water, at that specific site.

With these details reproduced in the wind tunnel, the ground wind loads on the launch vehicle are measured for the full range of wind directions. Ground wind load refers to the force that the wind exerts on the rocket as this tall, slender vehicle is secured near the base prior to launch. The wind load data that CPP provides is converted by ULA into wind speed criteria that are used on every launch to ensure safe prelaunch and launch conditions and procedures.

CPP and ULA work together to understand the effects of the wind to keep launch vehicles and their payloads safe prior to launch. Wind tunnel testing is a critical step in making informed decisions as to when and if it is safe to expose a rocket to windy conditions on the launch pad and when it is safe to launch.