Two weeks ago, we published the article, “Is there such a thing as tornado-proof?” in which we claim, to survive a tornado, most structures would have to resemble bomb shelters. Our claim that, “Tornado proofing is probably more expensive and troublesome than necessary…” caught the attention of Dr. Kirsten Orwig, an expert in the damage caused by wind during storms and extreme events. She offered many important points, and we are very glad she agreed to let us share them so we could present a more complete perspective on tornado-related damage. Kirsten is an Atmospheric Perils Specialist with the global reinsurer Swiss Re and (full disclosure) she was a Senior Atmospheric Scientist with CPP early in her career.

While “tornado-proofing” homes and commercial buildings would be very cost-prohibitive in most circumstances, structures can be cost-effectively designed to withstand the vast majority of tornadoes. Approximately 95% of tornadoes in the US are EF2 intensity or lower (the Enhanced Fujita, or “EF,” scale ranks the strength of tornadoes based on their destructiveness), and the majority of damage observed in EF5 tornadoes is caused by winds of EF3 intensity–136-165mph–or less. The basic design speed for many structures is 90mph, which corresponds to a low-end EF1. That means most tornadoes cause costly damage to any structure they hit. 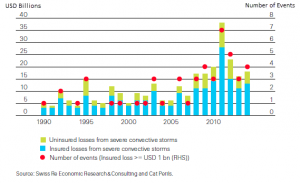 In 2014, the city of Moore, Oklahoma enacted building codes intended to resist damage up to EF2 tornadoes, or 135mph, after being struck by four major tornadoes in fourteen years. And unfortunately, the community was hit again only a few weeks ago by an EF2. Several studies have also recommended changes to building codes to mitigate the impacts of tornadoes (e.g. NIST Joplin report, University of AL report, etc.). Researchers have also shown that if the entire state of Oklahoma adopted the same codes as Moore, the benefits would outweigh the costs 3 to 1 (Western University and Austin College Report). This is consistent with other estimates that for every $1 spent on mitigation, $3-$10 is saved when a disaster occurs.

Given the alarming trend of increasing losses from severe thunderstorms in recent decades, which is 9% per year on average compared to 6.6% for all disasters (Swiss Re Sigma Report), more resiliency and mitigation is needed. As communities grow, they will become increasingly vulnerable to wind-related damage. Tornadoes will continue to occur, but they don’t need to be catastrophes when they do.

Dr. Kirsten Orwig is an Atmospheric Perils Specialist with Swiss Re, where she leads atmospheric hazards risk assessment modeling and outreach. She developed a new approach to tornado risk assessment modeling, served on the American Geophysical Union Natural Hazards Focus Group Executive Board on the Natural Hazard Mitigation Association board. Kirsten has spoken frequently on climate change, severe weather, and catastrophe insurance. She co-authored US Tornadoes: An Examination of the Past to Prepare for the Future, and other publications. Before joining Swiss Re, Kirsten was a Systems Integration Analyst at the National Renewable Energy Laboratory where she led modeling and forecasting research and public/private partnerships to more efficiently integrate wind and solar power onto the nation’s electrical grid. Prior to NREL, she was a Senior Scientist at CPP Inc., where she modeled wind in complex terrain and performed tornado risk assessment. Kirsten holds a B.S. double-major in Chemistry and Physical Science, an M.S. in Atmospheric Science, and she was awarded an NSF IGERT Fellowship to complete her PhD in Wind Science and Engineering. Her research focused on the measurement and characterization of strong winds with implications for building design.